Held At Beak Point Tales From The Roadside: Dispatch Edition 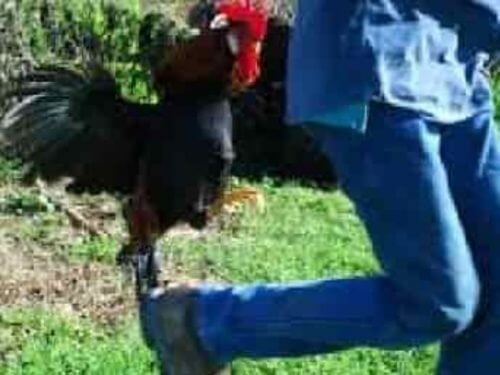 Scene: Out in the country, deep in the woods, down a neglected and very muddy farm trail lane with many water-filled potholes.
Weird tends to happen now and then in our work. Dispatchers hear all kinds of odd stuff going on in the background. This afternoon a call comes into dispatch for a winch out for a box truck stuck down a rural driveway. Wendy could hear the typical stress in CB’s voice. Who wouldn’t be stressed when they found themselves stuck in the mud?
Starting the evaluation questionnaire of the scene, Wendy kept hearing a rooster crowing, repeatedly and very loudly. So loudly and so often it caught her attention and made her giggle while thinking of the antics of her old rooster from years ago and mentioned to CB “I hear him crowing… (giggles)… I miss my old rooster.”
CB’s voice lowers and he says in very serious tone…”That’s not my chicken.” Wendy pauses. “I’m from the city”, he hisses into the phone, “I’m no country boy. I had to climb on top of these peoples car to get away from him.”
Wendy has a split second to process that and decide….is this real? CRINGE, Wendy had to pull it together real quick. Things take a turn for the worse. There are many worse things in the world than a possessive rooster, until you are facing one off. Remembering rooster etiquette, she warns CB “Ok, don’t turn your back on him and keep eye contact”. Sensing the fear she advised CB to defend himself. 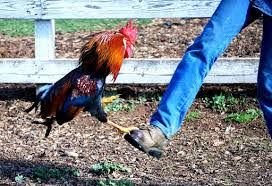 Now, anybody who knows anything about roosters, or seen the Youtube videos of when chickens attack, is that not only do they not back down, but a rooster will aggressively attack almost anything for any reason. It’s a rooster thing, he’s just doing his job protecting the hens. “If he comes at you,” she says, “don’t hesitate to kick at him, hard. You won’t hurt him, I promise.” Doubtful you even connect at all, she thinks to herself, but at least the rooster sees him fighting back.
Wendy immediately gets on the radio to advise the Winch Out Team of the hazardous animal situation to deploy Rapid Response Team. Concerned that she starts to hear CB breathing very heavily, she checks in…”Are you ok? She asks CB. “Yeah” he huffs. “I jumped off the car and ran for it.”
Apparently, CB just ran a quarter mile of muddy rural farm driveway during that short time and crossed the street, then turned around to see the rooster by his truck eyeballing him. (queue The Good, The Bad, & The Ugly whistle). The rooster finally felt the threat was gone out of his territory, turned around and left since he was so far away from the hens.
The team arrives, still kinda wondering if Wendy is running a drill, but ready to battle the rooster. Fortunately, by the time the team arrived, the rooster had moved on and everyone got away without a scratch, well except maybe the box truck. Unfortunately, that means there is no footage of said rooster holding a customer by beak point.
Written by:
Heather Hess & Dispatcher Wendy
Branch Manager
heather@hesscoinnovations.com
A-Hessco Roadside Assistance & Towing Innovations
By HESSCO INNOVATIONS|2020-04-14T23:12:22+01:00April 14th, 2020|Categories: Jacksonville FL|Tags: roadside assistance|